You know, I’ve had a right old day of music today. I honestly can’t remember what I started with, but I went over to some deep house for a while after which I listened to the frankly fantastic Mr Wibblies Chiller, which is brilliant music for home working.

This is all atmospheric and stuff, though I wouldn’t go as far as saying mellow. In fact, I don’t think I’d go anywhere near saying mellow. It responds to the need for background music but it also rewards deep listening. It is also one of those marvellous things which sits in my head as frankly uncategorisable. I like when that happens.

In order to ignore the woes of the cricket for, ooh, some seconds, let’s type a random paragraph that bears no relation to the almost indescribable music that this post is bringing to your attention.

Of course, using the word ‘indescribable’ is in fact a description of sorts, albeit a meaningless one. Much like most music reviews (/snark).

1000 monkeys at a typewriter, etc. Dancing about architecture and all that.

Having said that, one of my posts that was filled with non-sequiturs when I was going through that phase of copying stuff out of my ramblings document was quoted on the release of that artists next release on his Bandcamp page by his record company. Now, to post that album I feel obliged to find another bunch of such ramblings. Takes my mind off the cricket, I suppose (all out for 67! Fucking woeful!)

Black Impulse isn’t an artist (that I’m aware of). It is a radio show.

It’s proper good, it is. I’m plowing through the catalogue now, and there will be some posts up coming from which I thank Black Impulse.

I’m not going to try and describe music any more. If you’re lucky, I might ramble on about something completely unrelated.

not this time. But here’s an interview they did.

Jenks Miller brings us the first Horseback release since the really rather good ‘Piedmont Apocrypha.’ Dead Ringers sees a natural evlution in the Horseback sound, which is to say, he’s carrying on down the road that he was going down.

What this means in practical terms is that the rifftastic, droney, atmospheric, groovy, noisy mashup that is Horseback continues to be a rifftatstic, droney, atmospheric, groovy, noisy mashup. He’s kept his vocals exclusively clean this time out, which I think works for the better. There’s also quite the sonic crossover with one of his other projects, Jenks Miller & Rose Cross NC, lending proceedings an alt-country air.

Listening to it last night again I was reminded mainly of the wonderful Appliance, who probably fitted few of the descriptors I used previously – it may have been partly the crystal clean production (a feature of all Horseback recordings), partly the drum machines which feature on the early parts of the album. The night before I found myself thinking of Julian Cope, particularly on the tune most likely to have slotted onto his earliest releases, In Another Time, In and Out of Form. Before that it was the HP Lovecraft band from the late ’60s. It is entirely possible that this album will remind me of a different artist every time.

There is a minor imperfection in that the last tune is about 6 minutes too long for my money; he could have kept the post-dubstep experimentation down to a mere 10 minutes and it would have been fine! But this is an otherwise minor quibble, as this is otherwise my favourite Horseback album.

Which must be one of the most inappropriately named albums ever. 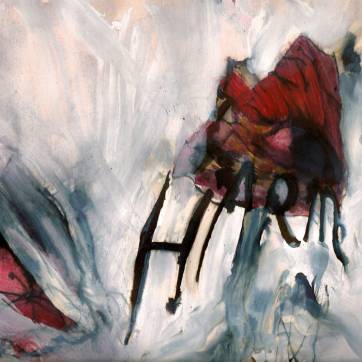 See, I’m not going to try to convince you that this is easy listening. It isn’t, far from it. What we’re hearing here is essentially feedback and noise, with an added spacerock type of pulse in the second track. Human voices are there, but a distinct message – or even word – is not what they deliver. These are some very abstract musics.

If you read the quotes they have on the page, you’ll notice one of them calls it ‘harshly constructed noise.’ It’s the only quote which, for me, misses the point of it, seemingly equating this type of composition as being harsh because of its very nature.

Because I don’t find this harsh at all. I think it’s almost ecstatic, certainly the most celebratory sort of feedback driven soundscape I’ve ever heard, and having spent time with academic notions of ‘interesting modern compositions,’ I’ve heard quite a lot in this category. There is much to be said for harsher stuff – it can be strangely cleansing when the moment is right, but this is a different thing entirely. I don’t think its even in the same park. So this is not ‘harm’ for me. (Compare it to one of their other albums, which I could only stand for about 5 minutes…)

So here’s where I tell you that this thing syncs up somewhat with one of my upcoming changes. After I put out my next album, I was planning on doing a switcheroo on all my tunings. Now, if you’ve looked down the bottom of the bandcamp page, you’ll see that this album is performed in Solfeggio tuning, which is one of the tunings I’m going to use (the other being the 432Hz variety). This album turning up in my consciousness at the time that I was about to make the transition is a pretty surefire nod from the universe, as far as I’m concerned. (By way of hat tip for this album, I should point out that I finally got round to going through the final ‘Address druidons‘ on Julian Cope’s website, and it was via this that I also discovered the wonderful Inutili).

But anyway, there are all sorts of claims made about the Solfeggio tuning. If it’s the tuning system itself that makes ecstatic, celebratory sounds out of feedback and noise, what else can it do?