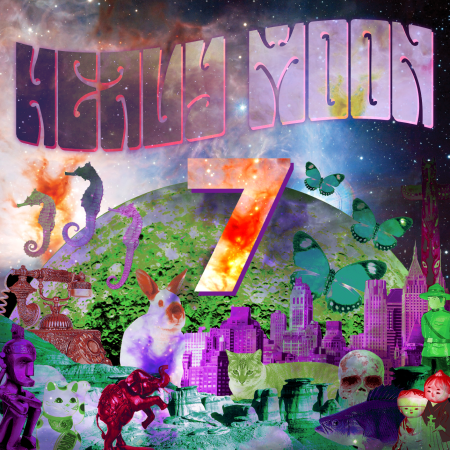 This is the seventh in a series that I never knew existed. Yet more to add to my ‘to listen’ list, which is all very well but at some point I might want to listen to the music I’ve bought as well…

To the task at hand, then. Heavy Moon is the project of Jacob Rehlinger, who plays in Moonwood. Heavy Moon 7 is the, er, 7th release under this name. Probably.

This is instrumental music that reminds me of (deep breath): Pink Floyd, Jean-Michel Jarre, ELO, War of the Worlds, White Hills, Kraftwerk and Circle/Pharoah Overlord. The Arachnidiscs blog also suggest Hawkwind and Harmonia as reference points. Mouth watering, I would say.

What I really like about this release is that the download came with the tracks split singly, but also done as on sides of a tape, which is how I tend to listen to this one. Also, the cover. Is it random? Is anything? Does it even matter? The music!

Why does writing about music always make me incoherent?

I do have albums to tell you about, and I will do some of that again soon. But I just really feel the urge to do this:

Various appalling sonic viruses try and worm their way into my head and find a formidable defender, my very favourite piece of music ever made (at least, at this moment in time). So effective is it that when, say, the theme tune to I Can Cook wants to go around my head regardless of my choice in the matter, I simply have to summon up my memory of this and Boom! my head contains quality for the rest of the day:

Because of Nadja’s turn on Dusted’s listed feature, I’ve been seriously back in the love with Pharoah Overlord. The album from whence the featured track came (Lunar Jetman) has proven to be impossible to get hold of from all my sources – even Ektro Records doesn’t list it, and it allegedly came out via them! These Finnish avant-garde types are definitely originals; I can’t work out their distribution methods at all. Marvellous music, though. Any suggestions welcome, subscription services need not apply:

Thanks to the Can You Get to That blog, I now know about Kraftwerk doing a song about Heavy Metal (or something):

Back in the very early years of this century, I quite relentlessly played the self titled debut album from Sona Fariq. Since it was on a major label and everything, I thought it would be the work of a click to find my favourite track from that on Youtube. Not a bit of it. The best thing I can find is this live video which has appalling visual quality. What gives? Which means that I currently have to shelve the post I was going to do about this album unless I create a youtube account, figure out how to marry music to visuals, and upload it all myself. Ha!:

I’ve started toying with a cosmology that enfolds the idea that life as we understand it is functionally equivalent to performing on a stage, and that after it’s all over you go back to the audience and watch the rest of the show, maybe even jump back in occasionally wearing a new costume. This song has been going around a lot in my head. The two strands are related, though it may not seem immediately obvious:

Finally, this. Just because this song is fantastic, hasn’t worn off after nearly 20 years of regular playing, and is way more psych than much of the revivalist stuff coming out these days. Does anyone know if they ever did an album? Me wants to know: