Lee  “Scratch” Perry is responsible for at least three of my very favourite ever pieces of music.

One of the best things about getting older – and you’d be surprised how many best things there are about getting older, given the bad press it gets amongst da yoof – is that you can have as many favourite ever songs as you damn well want. Anyone trying to get me to narrow it down to some arbitrary number would just get told to naff off, though maybe less politely, followed by a diatribe about place, mood, environment, memory, etc. You can have as many favourite songs ever as you want, you know.

On this album that I wasn’t expecting, the great man is teamed with On-U-Sound, the great Adrian Sherwood. Now, other favourite songs ever have issued forward from this stable and its denizens., meaning that you could be forgiven for expecting great things from this, pre-loading an expectation on the thing before you’ve even given it a listen.

Fortunately, their shoulders are broad enough. There is much substance here, and with enough listens, I may even have some additions to me favourite ever songs.

I’ve just taken a phone call from the sky, it’s
taking the day off, it’s
Going to see the doctor, it’s
worried by the cutbacks, it’s
having nightmares of freedom, it’s
concerned about the future, it’s
scared of readjustment, it’s
clearly not a team player. Sack it.

Don’t forget the hinges, you might need them. Oh bugger, I left mine on the mantelpiece
–no, don’t go back, don’t worry about them. I’ve been thinking about giving them up anyway, this is as good a reason as any. I shall remain without hinges for a while
– unhinged, if you will, just to see what it’s like. I shall report back intermittently. Don’t wait up.

It’s been too long since I put some dub on here (sheesh, nearly a year) 😮

So I’ve got the week off work, which means my kiddies are staying with me, which means I have to be more within the real world than when they’re not staying with me. Their preferred methods of entertainment are, sadly, youtube gamer related, but when they turn these things off and play with actual toys,  I choose to fill the interludes with educational sound seeds. Hopefully they’ll seep in to their unconcscious minds and spring forth in later life.

Dub is one such seed. Your mileage may vary, and my children’s certainly does, but a groove is a groove, and these are some fine grooves. Like all dub, there is a high emphasis on consciousness – you’ll find it in the spaces. And like all dub, there isn’t a lot of description that I can give that wouldn’t be better experienced by actually listening to the thing.

So a Chilean kosmiche trio walked into a backstage party at a Wooden Shjips gig… and ended up re-working two tunes from their most recent release with the help of a minimalist drone guitar legend.

This is one of those collaborations that makes even more sense on your speakers than it does on paper. Föllakzoid have come a long way since their early days and have now forged a sound recognisably their own. Jason Spaceman slots right into it, as if he’s been playing with them for years. Some of my favourite of his guitar shapes come out on this, particularly a passage that reminds me of my favourite Spiritualized song, Pure Phase.

Did you ever hear Richard Fearless’ remix of Regular Fries Dust It, Don’t Bust It? That would fit on this release perfectly. The atmosphere has a groovy but woozy late-night feel (although it’s 8am as I type this; thanks kiddies!) The two pieces reworked aren’t that drastically changed from their first incarnation in that they are recognisable but they seem to have gained some extra space with the extra person on board. Their music continues to evolve in a manner befitting of true forward thinking mofos.

I mentioned in passing the idea of doing a dub mix post, which is a silly idea.

Fuck it, I’ll cheat and give him a sort of second appearance:

Those of you who have the compilation mindset (if you have, you know what that means; if you don’t know what that means, you haven’t) will have your own versions of this – a song that may not necessarily ever reach an all time top-50 if forced to name one at gun-point, but nevertheless is always in contention for your next mixtape. This one was one of those for about 10 years for me, from the compilation album that did so much to get me into dub, Crooklyn Dub Consortium vol II:

Another one from the Certified Dope vol II album. This samples a King Tubby tune called Dub Fever:

I do believe I may have mentioned this song before:

I could go on for ages, but my PC is old and laggy and I’m really killing it now. I’ll therefore finish with a bit of French electroclash, from the 2005 compilation French Dub system 2.0:

Fuck it, here’s one more… the rather good Alpha & Omega: 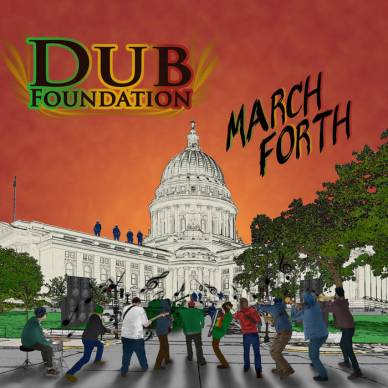 I likes me some dub. Because I don’t know why, I haven’t listened to much over the last few years. I used to listen to it really quite often. Many of my favourite ever tracks come under this banner. (hmmmmm considers dub mixpost)

Dub Foundation are a 10 piece live dub band based in Wisconsin. They make some really groovy dub tunes that are quite feel-good in their style even if they are singing about the crises of youth. Music like this is the reason that descriptors such as ‘crucial,’ ‘irie,’ and ‘righteous’ started getting applied to music, or at least, that is my understanding of music history. And also they remind me ever so slightly of ex-punker Burning Babylon.

the bandcamp is here: https://dubfoundation.bandcamp.com/album/march-forth