I have long loved both The Bug and Earth, obviously for very different reasons. The Bug’s London Zoo in particular was righteous in its wrath and groovy in its execution, whilst Earth’s catalogue (particularly since the comeback) is one often inducive to deep relaxation and meditation. You might not think they would make obvious collaborators, in other words.

Of course, if my finger ever came out of its shell-like and went and tried to find the pulse, then I might have been aware that this has been brewing a while since they did a single a little way back.

On this release, Kevin Martin seems to work to Dylan Carlsons’ strengths, letting the guitarist dictate the pace whilst he complements the tones with a sound that I find myself calling glacial paranoia. The grooves are there, but they’re dialled back. It’s about the atmosphere, which is dark and resonant. Ambient industrial grime, if you want a label.

Despite the fact that the times we live in are frankly a riot of chaos, I could imagine this as a surreal soundtrack to them. 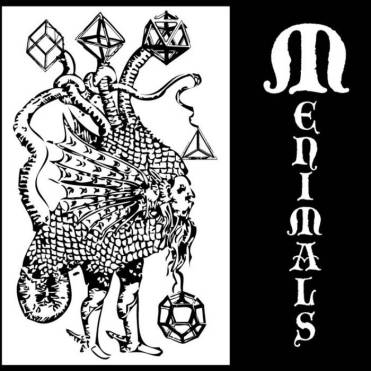 After being hat tipped by the mighty Heathen, I went to the Riot Season bandcamp, I did, and checked out the teaser tune. And I quite liked it, but wanted to hear more before deciding whether I wanted to buy it or not. So I rooted around (alright, then, I looked slightly further down the results page) and found the Menimals original bandcamp page which also has a self titled album on it, with the same opening track. And the whole damn thing was listenable, and the whole damn thing was mighty fine indeed.

But here’s the aforementioned thing: apart from the opening track, the tracklistings on these two self titled albums do not match. Are they actually different albums?

I hope so, because self titled number one is just so darn good. Dark and menacing, to be sure, this isn’t an uplifting set of music. Not guaranteed to break the ice at parties. Imagine The Bad Seeds doing the mid-90s Bristol sound – Tricky at his

most menacing, perhaps. One of the songs had me thinking of Underworld doing The Bad Seeds with the latter’s instrumentation, and the final song becomes really intense, a bit like Hey Colossus in their sludgier days. I also find myself reminded of the intersection of jazz with electronica and trip hop, for example The Lifeforce Trio and Triosk, although that may be more due to atmospheric reasons.

Anywho, I’ve embedded the original one since you can listen to all of that. And if you look at the artists description on the page…