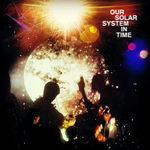 I meant to post about this when it came out since I eagerly anticipated its release after they did the pre-announcement thing and I listened to the first track, a marketing ploy I otherwise despise as being irrelevant to the digital age. But Other Things were Very Very Good and caught hold of my easily distracted attention span, so there you go, Beyond Beyond is Beyond records – you’d have had a proper on the moment big-up if you’d have just stuck it out when it was ready. Let that be a lesson to you.

Our Solar System are a collective from Sweden. This release contains two tracks, and so is definitely Music My Brother Would Not Like (I will explain that epithet in an upcoming post). Opener ‘In the beginning of time’ comes on like Pharoah Sanders chilling with a quite propulsive Parson Sound. ‘At the edge of time’ dispenses with the sax and brings the vox, largely wordless and ecstatic to start with but introducing actual words later on.

My own personal nearest reference point to this is actually Sungod – I could quite easily imagine these jams turning up on one of their albums. Both tunes exceed twenty minutes, and both tunes could keep going as far as I’m concerned. There’s a lot of repetition but also gradual evolution of the music too – not in a linear way, however. The music demonstrates an impressive understanding of the cyclical nature of the macrocosm. There, I said it (well, typed).

Like my most recent post, I’m going to put the many other projects so far associated with this amongst the tags to save me typing it all twice!

Sula Bassana is the guitarist in Electric Moon, who are probably my favourite practitioners of the ‘jam-band’ aesthetic. He’s a busy boy, as not only does he run Sulatron records, he actually has quite the back catalogue of solo releases, of which the above mentioned and pictured is the latest. He also plays in Krautzone and Zone Six.

He’s dropped his guitar for this one as this one is almost entirely electronic using mostly vintage (therefore analogue, presumably) instruments. The tunes have that propulsive rhythm associated with that area of the world that we’ve come to know and love, but also a really deep, meditative and trance like feel. I’m not talking Ibiza here.

Now for a bit of a rant – until the end of last year, I was happily using the word ‘krautrock.’ But now I actually think about it, I’m not going to use it. Given that the term ‘kraut’ was a derogatory term for Germans used by their enemies in the world wars, I should think it would be obvious why. I’ll stick to ‘kosmiche’ instead, for now, even though that’s in danger of getting nearly as overused as ‘psychedelic.’ Genre labels, eh? Can’t live with ’em.

Now, I wonder how the Germans actually feel about the word? I mean, one of Sula’s projects is called Krautzone. Perhaps they’ve decided not to be offended, simply decided to use/reclaim the word and let things be. Maybe the word was never offensive to start with and we weren’t imaginative enough to come up with a more offensive insult. Any Germans out there like to offer me their thoughts? There is always the distinct possibility that I’m being an over-sensitive, privileged middle class wanker here by trying to impose a ‘thou-shalt-not’ that isn’t actually necessary. But there’s always the possibility that I’m not.

I think I may have mentioned once or twice that I’ve been working on my own thang again. Well, this be that thang. The final details took longer to clear up than I was anticipating, but I’ve now put it up on Bandcamp and look forward to the next 18 months or so of not listening to it at all (it takes about that long for me to revisit earlier stuff due to the intensity with which it surrounds me as I prepare it for birth). I shall update the website when I’ve got the CDr side sorted for anyone who likes home made CDrs.

I was actually going to tell you about this as part of one of my chats, rather than giving it a full post, but yesterday I was contacted by the British Library about adding my catalogue to their collection. That made me figure that maybe the self-deprecation that always accompanies me putting music out really should stop now. After all, I wouldn’t put it out if I didn’t think it was worthy of being out there. These children are fully grown and can speak for themselves.

Whilst I’m blowing my own trumpet, I may as well mention my other blog that I started back in Feb which was also going to be muttered at the bottom of a chat post the next time I did a chat post. It’s where I show the world my doodles. The only words on the blog are the ones on the doodles, though there can be alot of those. If you like the sound of that sort of thing, then Seeds of Syntropy may just be up your alley.

I have literally just discovered these. They remind me of Josefin Ohrn + The Liberation, who nearly made it into my best of 2015 (Pridjevi got there instead, and I have been caning that recently -it’s wonderful).

It’s kind of shoegazy dreampoppy probably psych but I’ve lost track of what that even means now. Very hypnotic.

It’s a home recorded collaboration but sounds very professional. They clearly know what they’re doing. I’ll be following these.

I have absolutely no idea how to pronounce this Réabhlóid word though.