Skip to content
HomeKiss the Anus of a Black Cat

No, it’s not an order; equally, I shan’t stop you.

My 8 year old son and I have quite different tastes in music for the most part, although he does like some songs that I like, and is in fact more likely to like songs that I like than I am that he likes (in my world, that makes him more open minded than me, regardless of the fact that his range is tiny and limited to chart pop music). However, we do both agree on one thing – Sevenfold by Kiss the Anus of a Black Cat is one of the most marvellous pieces of music in the world. I can’t give you a direct link, it seems, to that song, but I can give you a direct link to this one:

I was aware of the above song from around 2007/08 ish, though I can’t remember how – I think it was from one of those periodic swaps me and my mate did where one of us would take a hard disc round the others and say ‘what should I listen to?’ Doing mix tapes has certainly evolved, eh? Anyway, it was one of my favourite songs in the world, but the rest of the album didn’t much grab me at the time.

Then at the beginning of 2011, I was on the Cold Spring site and discovered they had a £5 meltdown section, to which I duly turned my attention. As most of the acts were completely unfamiliar to me, I was browsing for those that let you listen to a tune or two. I’d got 2 that I decided to buy and decided to allow myself one more when I noticed they had The Nebulous Dreams by this band, and as I really liked that one song, I figured it was worth a punt. 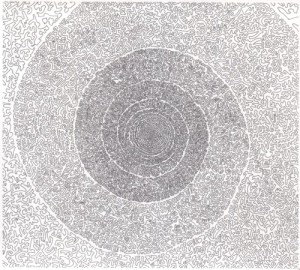 I listened to the album one memorable Monday evening, just after my aforementioned son had gone to bed and I had spent ten minutes enjoying some ‘fresh air.’ Although I had clocked that it appeared to only contain three tracks, I still wasn’t really expecting the epic 15-minute opener Between Skylla and Charybdis, from the screeching noises to the minimalist rhythm to the ecstatic climax. The 9 minute drone of Diptych defied expectations in a different way, and finally Miserere defied expectations even further by being… normal. Well, a very pleasant acoustic song with one of the best little riffs I know.

Their discography is actually all over the map. My personal favourites are the abovementioned, and their first album If the Sky Falls, We Shall Catch Larks which contains that song that me and my eldest are in such agreement about (and also the incredible 19-minute Sighing, Seething, Soothing). It also contains this:

Both albums favour the more long-form approach, with a minimalist, droning thing going on that’s right up my street. There are two slightly more traditional albums in An Interlude to the Outermost and Hewers of Wood and Drawers of Water, both of which contain some great songs but are probably best described as less consistent. Most of their Youtube content seems to focus on this stuff, so browse around if you feel the urge.

Their most recent release, Weltuntergangstimmung, is a complete change of style, kind of dark-wavey gothy with drum machines and things. It’s probably my favourite of their albums that features their shorter songs.

It properly divided their fanbase, though. Kudos to them for having the balls to do that. According to that Facebook page of theirs I linked to earlier (because their website is so annoyingly uninformative), they’re back in the studio, so it will be interesting to see what comes out…

Apparently the band name comes from a medieval witch ritual. I’d be interested to know what that ritual was and what it was supposed to achieve.

One thought on “Kiss the Anus of a Black Cat”